To this day, Leonardo da Vinci remains one of the most prolific inventors ever to have lived and  for very good reason. Da Vinci was born in the 1400s but his inventions were hundreds of years before their time, so much so that scientists couldn’t even comprehend some of his blueprints and designs until hundreds of years after his death.  Below we have outlined some of da Vinci’s most impressive creations and taken a look at how they have stood the test of time in the 21st century:

Da Vinci spent a large part of his life obsessed with the idea of flight and trying to figure out a way that humans could fly and safely return to the ground. Eventually, he invented the earliest form of a parachute which was made up of wooden pyramid-like poles with sealed linen draped over it. da Vinci wrote alongside his sketch that it would “allow any man to throw himself down from any great height without suffering an injury”. However, there is no harness drawn in the sketch which would suggest others tried it and has led historians to believe that he only ever tested his parachute from trees and other small heights.

Above is a photo from 2002 of adventurer Adrian Nicholas doing the only true test flight of da Vinci’s parachute which has ever been conducted. He made the parachute exactly according to da Vinci’s original sketches with the addition of a harness (obviously) and descended over the Mpumalanga province of South Africa from a hot air balloon which was more than 2km above ground.

This is another amazing example of Leonardo da Vinci being ahead of his time. While the self-propelling cart that da Vinci designed is nothing like the kind of go-karts we use today, it was extraordinarily innovative for his time. So much so that it wasn’t until almost 400 years after da Vinci’s death that anyone could even understand his drawings and discover his invention. The cart that da Vinci designed was powered by springs and featured steering both steering and braking, all of which were concepts that hadn’t even been created in mechanical form yet.

In 2006, The Institute and Museum of the History of Science in Florence, Italy built a model based on da Vinci’s design and to the shock of many, the cart worked perfectly. The model is pictured below:

Image Source: The Institute and Museum of the History of Science

Even today, robots are considered to some extent futuristic and technologically advanced but as far back as the 1400s, da Vinci was building his own version of a robot. In fact, it was a robot knight which was commissioned by royalty and used to help man a public event in Italy. Leonardo created a complex system of gears and wheels that were connected to a pulley inside a suit of armour and meant that the “knight” was capable of independent motions like sitting down, standing up, moving its head and lifting the visor. Below is a photograph of a 2002 prototype built by Roboticist Mark Rosheim using several different, original drawings and blueprints made by da Vinci himself: 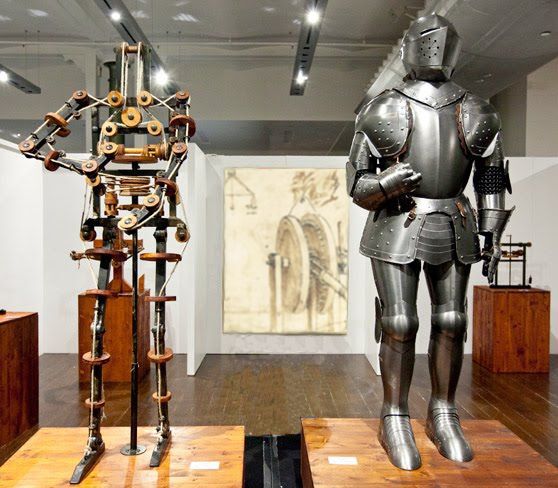 It’s the work of amazing engineers and inventors like Leonardo da Vinci who inspire the team at Prime Engineering to constantly develop and hone our skills. At Prime, we are committed to always providing the most successful and effective engineering solutions for our clients and businesses. To learn more about our services, get in touch with us today!

Most Impressive Stadiums around the World